SPEAKERS 2022 on the verge of sale! The 25the annual installment of the oldest, largest and most important convention in the spoken media industry, SPEAKERS 2022, is set for Friday, June 10, 2022 on the campus of Hofstra University in Hempstead, New York, in association with the prestigious, multi-award-winning college station WRHU Radio. Its roster of speakers and attendees promise to be a “who’s who” of the spoken media industry and its program will boldly tackle the industry’s most compelling issues of the modern age. Register fast as this event is about to sell out. The sale may come to at any time go ahead but the absolute deadline for registration due to out of stock will take place on Monday, June 6 at 5:00 p.m. ET. View the full up-to-date agenda and information on registration, sponsorship opportunities and hotel accommodations by clicking here.

WBT-AM/FM, Charlotte announces promotions and new contracts for journalists. Charlotte news/talk WBT-AM/FM announces it is ‘committed to remaining Charlotte’s news and information leader in its second century of broadcasting’ with promotion of veteran journalist and broadcaster Marc Garrison at

news director and the addition of a weekday talk show for the senior reporter Brett Jensen. Garrison and Jenson signed new multi-year contracts and radio one says he will add a news producer to his team. Over the past two years, WBT has added anchors Anna Erickson, Marc Mullerand Tony Marin working alongside Garrison, Jensen, journalist Jo

commitment to journalistic objectivity and integrity for decades. He will continue to host “Charlotte at Six” each weeknight, delivering his signature storytelling while overseeing the day-to-day operations of the WBT newsroom. The station adds that in less than four years at WBT, “Breaking Brett Jensen” has become synonymous with news coverage, delivering exclusive content for the Charlotte community like no other. In addition to his reporting duties, Jensen will host “Breaking with Brett Jensen” each weeknight from 7:00 p.m. to 8:00 p.m. where he will dive deeper into the stories he has reported and take calls from listeners. Regional VP and Market Manager of Radio One Marsha Landesse commented, “Mark and Brett are among the elite news professionals in the country, period. We are thrilled that their new appointments will strengthen Charlotte’s top news department.

WVOX/WVIP’s William O’Shaughnessy turns 84. Longtime New York Radio Director William O’Shaughnessy died Saturday (05/28) at his home in Litchfield, Connecticut, at the age of 84 after a battle with urothelial cancer. He was widely regarded as one of the nation’s most colorful community broadcasters, well known for his editorials, commentaries, appreciations, elegies and character portrayals, which inspired The New York Times at 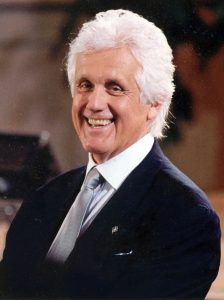 state that “Bill O’Shaughnessy’s comments make his New York television counterparts look like such a hodgepodge”. He was president and editorial director of WVOX and WVIP in New Rochelle, New York – stations with which he was associated for 67 years. He began his career in 1957 at the first WVIP in Northern Westchester, a legendary suburban station owned by Peter Martin, producer of “Howdy Doody” and “Author Meets Critic”. He was the station’s top advertising salesman at the age of 21. He then served as executive assistant to WNEW, the general manager of New York. John Van Buren Sullivan. He was a longtime member of the Broadcasters of America Foundationof the board and chairman of its Guardian Fund. SPEAKERS editor Michael Harrison released the following statement: “Bill O’ Shaughnessy was more than an accomplished broadcaster and author. He was a living symbol of the most glorious ideals of radio—both in substance and style—and he was one of modern America’s most influential and inspiring supporters of the First Amendment. Services will be held at Lloyd Maxcy, 16 Shea Place in New Rochelle on Tuesday, May 31 from 4:00 p.m. to 7:00 p.m. The funeral mass will be held at Saint Anthony of Padua, 49 South Street, Litchfield on Wednesday 1 June at 11.30am. In lieu of flowers, the O’Shaughnessy family would appreciate a donation in his honor to the Broadcasters of America Foundation: https://broadcastersfoundation.org/donate/

WWO Audio Active Group: The Benefits of Emotion-Based Branding. In this week’s blog of Westwood One Audio Active Group, two different types of advertising text are studied: rational text anchored in features and benefits and

emotion-based copy that can be used to build brands. The blog reports that according to Binet and Champ, the rational approach to advertising (relevant and useful targeted activation) combines with the emotion-based approach which “creates positive feelings and associations” through broad advertisements that are “interesting and enjoyable”. The report also concludes that: 1) emotion-based creation creates stronger brands and drives better business outcomes; 2) Emotions guide and simplify our decision-making: positive emotional responses lead to a positive evaluation of the choice; 3) According to the authors John Keron, Orlando Woodand Tom Ewing, announcements should build familiarity, create positive emotion and facilitate processing; and 4) Podcast listeners prefer fun and entertaining ads, but say they’re more likely to hear rational podcast ads that communicate features/benefits. See the blog here.

SPEAKERS News notes. The Radio Television Digital News Association completed its announcement of the Edward R. Murrow Regional Award winners and Audacity has been honored with 23 regional Edward R. Murrow Awards for his

Osteen Thursday, June 2 on Joel Osteen Radio. SiriusXM says, “Through one-on-one conversations with world-renowned leaders, athletes, entrepreneurs, celebrities and influencers, ‘Conversations with Joel’ will allow listeners to unlock the champion within them, overcome challenges, overcome barriers and be their best in all areas of life. His regular guests include the actor, comedian and director Kelsey Grammar; actor and television host Terry Crews; Host of “Good Morning America” Robin Robert; CBS Sports Streamer James Brown; NFL agent Nicole Lynn; “FOX & Friends” Host Ainsley Earhardt; television personality and sports journalist Jay Glazer and others…..ABC News releases the trailer for its new three-part podcast series, “Reclaimed: The Story of Grandma Till-Mobley.” Hosted by historian and ABC News contributor Léa Wright-Rigour, the new series chronicles the life and legacy of Mamie Till-Mobley, whose fight for justice after the brutal murder of her son helped spark the civil rights movement. The first episode of “Reclaimed: The Story of Mamie Till-Mobley” debuts Wednesday, June 1, with new episodes released weekly…..iHeartRadio and Sound Argument LLC announce the launch of a new documentary podcast entitled “Class Action”. Hosted by Katie Phanglitigator, presenter and host of MSNBC and Peacock, the 12-part podcast series will follow a diverse cast of outstanding law students battling it out in mock trial competitions across the country. The first two episodes will debut on June 7 and can be streamed on iHeartRadio and all other major platforms.

The Aftermath of the Uvalde Massacre/Weekend Gun Violence/Gun Control, Russian-Ukrainian War, Primaries/Trump and GOP, Inflation/Recession Fears, Investigating SCOTUS leaks, monkey pox and Memorial Day holidays among top news/debates over the weekend. Investigating police tactics during the attack on Robb Elementary in Uvalde, Texas, the wave of gun violence in the United States over the weekend, and talking about gun control measures; Russia’s continued invasion of Ukraine and the global effects of the conflict; the primary races for the November midterm elections and donald trumpthe influence of the GOP on the GOP; high food and gasoline prices and concerns about an impending recession; the intensification of the investigation into the escape of the Supreme Court judge Samuel Alitoreversal of majority opinion Roe vs. Wade; the spread of monkeypox; and the Memorial Day holiday were among the most discussed stories on news/talk radio over the weekend, according to ongoing research. SPEAKERS magazine.